THE AMAZING TRUE (FILM) STORIES OF BANDS UNLIKE EVERYONE ELSE BUT SO LIKE EACH OTHER: REVIEW 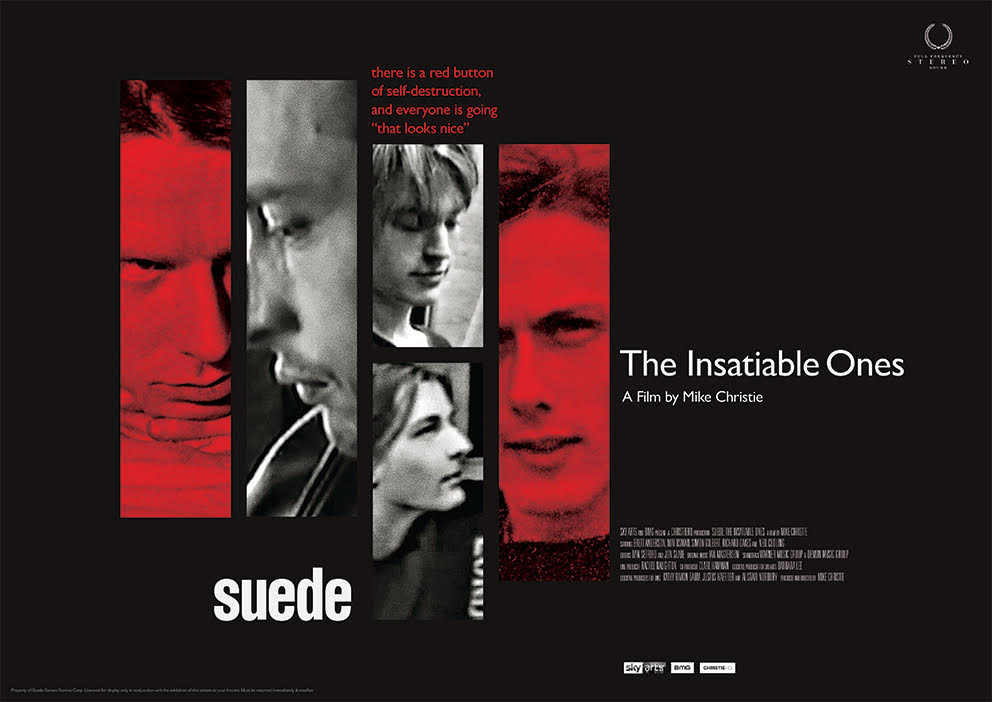 SUEDE: THE INSATIABLE ONES

Whatever else changes about the itinerant, almost always unsuccessful (if money and fame are your measures) and physically and mentally harmful life of the working musician – be it technology, income streams, licensing laws or Zuckerberg knowing and monetising your every move – some things will never change.

Young men and women will do it with little regard to facts of penury and waste; many of us with far less talent but a need for the sound, will be thankful they do; and the stories will remain as recognisable and yet as irresistible as ever.

These two documentaries, of a band formed in an English backwater and another created in half ignored/half feared corner of Melbourne, are not just proof of the persistence of the dreams, and the repetition of the damage, but of the way we explain them.

In a time of elaborate fantasy and hammy old school biopics (Rocketman and Bohemian Rhapsody) and wilful/playful retellings (The Rolling Thunder Revue), of both streaming services series (The Defiant Ones, Hip Hop Evolution) and documentaries which take liberties with time and history to tell a bigger story (Amy, both Whitney Houston films), The Insatiable Ones and Skad’ For Life work in conventional, familiar, linear forms.

They’re told chronologically; built around a rise/fame/fall/recovery/redemption structure; heavy on talking heads (principally the band, with some outsiders and barely any “experts”); the emphasis on personal footage rather than filmclips or TV appearances; a lot of gigs for both, a lot of drugs for one; and each climaxing with a deeply personal, moving, joint session in a London venue.

Each film too almost wholly eschews contemporary context, with only a few references to what else was happening musically around the bands, like Brit Pop, the peak of pub rock, grunge etc.

Certainly though, the aesthetics are markedly different.

Brett Anderson’s intention with Suede was to talk about sexuality the way Lucien Freud paints the human body: “slightly uncomfortable but very, very real, candle coloured skin under a fluorescent light” and their metallic-tasting, angular pop contained a similar touch of appeal and discomfort.

Mike Christie’s elegant, almost ostentatiously “filmic”, film reflects and mimics the intensity, beauty and sheen over even the ugliest elements, helped in no small way by the fact an articulate and ready Anderson has aged not just gracefully but impressively, his weathered face more handsome than beautiful now.

Meanwhile, the Hearn brothers, Bruce and Ian, were always more interested in the socio/economic context of Melbourne’s Strange Tenants (inspired by the English Two Tone bands’ racial and political rebelliousness as much as their family’s history of left-wing resistance) the communal spirit in and around them, and the sheer pleasures of a sweaty dance.

Fiona Cochrane’s fuss-free, less glittery presentation – which begins with a brief history lesson on the roots of ska and its growth in a hostile Britain - gives her film a similar grounded texture to the Strange Tenants, her tight focus on the faces of the Hearns and the contoured, lived-in visage of bassplayer Chris Rogers in particular, pulling us into a story without the inbuilt drama of the more damaged Suede.

Interestingly, curiously, bar Justine Frischmann (who was an early member of Suede before forming Elastica, as well as Anderson‘s girlfriend) and Richard Osman (bassplayer Mat’s brother and a comedy/TV personality of his own) in the Suede film, and Strange Tenant sons Dan Holmes and Alex Hearn Mackinnon (who now are part of the band with their fathers) no partners or wider family are interviewed in either film.

(Though Ricky Gervais turns up in one – guess which.)

Given the impact of the lifestyle, the dedication and devotion to the musician life, detailed by the band members, their contributions would have been illuminating. And possibly a corrective too. After all, it’s one thing to grasp the effects of drugs on an individual, and his colleagues, but that’s not where the ripples end is it?

But this is not their story. The story instead is about the love, the passion, for making the music, and for each other, of two different but yet somehow in some ways identical groups of men.

For yes, that’s another familiar but nonetheless affecting element in these kinds of stories: the connection, so often wordless (because, as one Suede member says, as young musicians they didn’t have the emotional vocabulary) between people brought together – and sometimes pushed apart – by a shared obsession.

That doesn’t look likely to change any time soon.