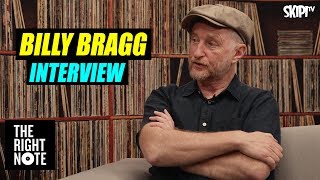 It’s all relevant. It’s always been relevant. For Billy Bragg and the UK. In the 1980s and ‘90s, Bragg sang about fashioning a new England (when he wasn’t looking for another girl) from the one being dressed up for the kill by the Thatcher government – one that didn’t involve crushing those below and booting out johnny foreigner so you could rise to the top. In 2006, his second book, The Progressive Patriot, argued that his was a country built on migrants and idealism, not th